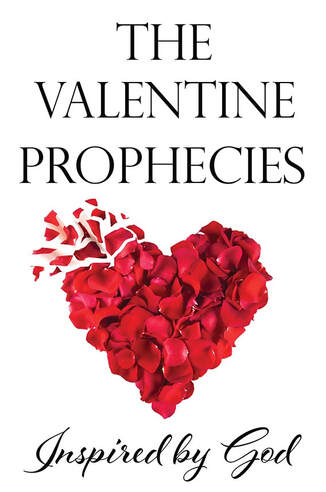 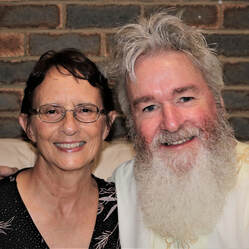 David & Margaret Dellit
david@thevalentineprophecies.com​
READERS' TESTIMONIALS...
Ronald J. Glowacki, United States, Testimonial:
"THE CLARION CALL"
"This book is for the hard-core Christian. It is a very "hard read' even for us who have been on the journey many years. Three quarters of this book is Father God speaking directly to the author. God is not very well pleased with the way man runs His Church. His Church has been so fractured and splintered into so many denominations, even God chooses not to recognize it. God is not happy with His Children's constantly fighting over whose doctrine is right. God shares a lot about the tithes, being slain in the spirit, speaking in tongues, spending big money on buildings and forgetting about the poor. This book really shocked me and made me realize that one can never assume they "know God." He is a very Loving, Gracious Father! To ALL nations, Races and Creeds! I dare you to read it!"

Prophetess Leila Nord, Australia, Testimonial:
"GOD'S CALL - YOUR CHOICE!"
"Wow! What a blessing of supernatural proportions. But then that is exactly what the Holy Spirit specializes in - supernatural surprises! I have no idea how I found this book. I was scrolling through...well. I don't know what...and happened across this link and straightway transferred the shared information to our ministry page. Then sat in my moment of horror, as I questioned with the Lord why I would share with the folks who share our pages, and ministry in general, something I knew nothing about, penned by a guy I knew nothing about. I prayed in earnest as I contemplated how to delete it as quickly as I had shared it...before anyone else got to see it, and start asking me questions - I knew nothing about. What an embarrassing situation. Totally out of character for me. So I earnestly repented of my haste and asked the Lord to set me straight, on this subject...and HE did! Immediately! My PEACE was restored as the Holy Spirit spoke into my spirit, and explained that it was HIM all along. That is why I didn't hesitate when I saw it. It wasn't about the book title or the person, David Dellit. It was about the Holy Spirit and what He wanted to say to me and mine. So I quickly set to and Googled all I could find about both; the book and the man. I have never been sorry. I have been so blessed by this introduction via the Holy Spirit, and will continue to share this present day prophetic masterpiece, with all I come in contact with. We are literally running out of time. God is about to return for His bride, the church, and we are still not dressed, ready to accompany Him, to the "Marriage Supper of the Lamb." We have been complacent for too long, and this is HIS wake-up call to us, HIS bride! Amen! I am so glad we got acquainted. Thank You Holy Spirit, and thank you brother David Dellit, for your faithful obedience, in doing what He said, when He said it. His church can only be the more blessed for this beautiful Love letter - addressed to us, each one. Blessings. Leila Nord."

Prophetess Joanne Baumeister Turner, United States, Testimonial:
"ABSOLUTELY SPIRIT-BREATHED"
"This message - every single part of it, has been on my heart for the past few years. This is not bashing - this is God pleading with a people that will be left behind when He comes for those who are in love with Him. It is the deepest heart of our Savior, hoping that by making His Heart known, He will break through to more of the children He loves. No doubt about it - He is returning and it will be soon - When His Spirit is taken out of the world and the person who calls himself Christian because he goes to church on Sunday, or says they believe in Jesus is left without wife or husband or children, friends or the man in the seat next to him at church, and he wonders why - if he had returned to his First Love that he had left when he was first saved he would have been one that had been taken. Then all left will know the age of mercy has ended and they will know they must return to that love of Jesus they had; but it will cost them their life in a world that has become a living hell. Please, please take this message to heart. God is speaking to His people."

Anonymous, United States, Testimonial:
"EXCELLENT BEYOND MEASURE"
"Both books carry Gold in the reading. Excellent beyond measure. Just the shipping cost a lot"

Rebecca, Canada, Testimonial:
"I just wanted to tell everyone how much this book has made me think and has taught me. ..."

Prophetess Mrs. Y. Coombs, United Kingdom, Testimonial:
"GOD'S WORDS."
"As a Christian, I knew the moment I read the first word the spirit prompted me that this is God's heart and mind through the prophetic word of David. I knew it was my Lord speaking truth in love and correction, individually to myself, and corporately to his church to read, and reveals his deepest love and desires for us to equip us fully for the times we are in! There were no un-scriptural errors."

Anonymous, United Kingdom, Testimonial:
"I HAVE NOT FINISHED TO READ IT YET BUT IT ..."
"I have not finished to read if yet but it is exactly what I needed to read right now. Thanks God for this book and to David Dellit for listening to His word and guidance!"

Prophet Matthew Robert Payne, United States, Testimonial:
"COMPELLING READ"
"I found the book to be very encouraging. It is a long while since I read it, but as a prophet myself I felt the ring of authenticity in this book when I did. I commend it to you,
Matthew Robert Payne. ​Author of 20 books on Amazon and 12 books on Audible"
UA-50506160-1