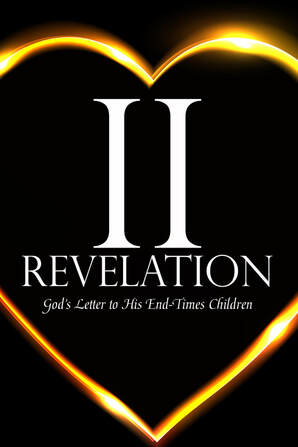 Paperback & eBook & Audiobook
'II Revelation' contain messages from God to all people including Christians, Jews, Muslims, everyone including you and me.
After 'The Valentine Prophecies' were published in early 2014, God told me He wanted a second book published under the title 'II Revelation: God's Letter to His End-Times Children'. God said this second book was to contain only His words, presented in chapters and verses to aid referencing, without my sections that He included with 'The Valentine Prophecies'. I did as God commanded me. All glory to Jesus!
READERS' TESTIMONIALS...
Julie Ottaway, United States, Testimonial:
"I LOVED BOTH OF DAVID'S BOOKS OF LETTERS".
"I was unsure at times, and other times it was so dead on that I cried. God shook me out of my Church over 5 years ago. I knew something was wrong. The pastor was a musician and recorded a lot of cd,s. I started wondering who was being worshipped on Sunday mornings. I began worshipping on my patio every morning. I turned my life and decisions over to him. This book was confirmation. Just recently I have been feeling like God was telling us that all the divisions of denominations had to go. Bingo, David's books were there and confirmed what I was being told. I too have had a hard time understanding how the Holy Spirit sounded. I know understand how long it has been with me and how to listen and know the feeling. Thank you David for having the courage to be obedient to our father for our sakes. A question for David. Why did God not mention the horrific murders of millions of Christians by Islamic terrorists? Those were the times I felt unsure. I also have believed that Allah was not Our God but an idol because they worship the Kabala stone at Mecca. Can you clarify this for me? It really was the only thing that I was conflicted with."

Prophetess Leila Nord, Australia, Testimonial:
"II REVELATION -- YOUR "SPELL-CHECK" TO ETERNITY!"
"After my initial "Encounter of the God Kind" with The Valentine Prophecies, my introduction to II Revelation was much more sedate; but none-the-less powerful. One cannot encounter God - in all of His glorious presence, and remain unchanged. If so -- I doubt you have really "encountered God at all"....? II Revelation -- is simply a more "condensed version" of The Valentine Prophecies. Where God had an interconnected conversation with David Dellit throughout The Valentine Prophecies; in II Revelation, He has pulled His "red-letter" chapters out, and instructed David to organized them in book form, for more organized study purpose; both individually, and collectively, in group study. It is somewhat like the New Testament "red-letter" versions of scripture; where we have no confusion, as to the parts of scripture directly spoken by Jesus, and those that are not. Human existence, as we now know it, is fast coming to an end. When Christ ascended into Heaven, He left us with a promise of His second coming. His return to earth -- to rule and reign -- forever -- with His blood-bought children. He has always had a calendar, from which He orchestrates His Godly timetable; His Godly schedule -- with signs and signals, for our informed good. We have not always been so good at reading His signals, and we have been even less attentive, to His Instructions on how we are to live, and conduct our general behaviour, in line with His commands, and promises, and blessings. It is called OBEDIENCE! Life - as we know it today -- globally -- is in a perpetual state of lawlessness. "Obedience" is a foreign language -- to ALL languages. Very few, it appears, wants to live a life of obedience; either inside or outside the church. Yet, without understanding the meaning of that word "obedience" and the relevance it has on our eternal future, we are a lost cause to the Kingdom of God. He set His clock, to have the alarm ring at His appointed hour, to call His Children home. He is The dressed and ready Bridegroom - coming for His glorious Bride - ready to enjoy the Marriage Supper of the Lamb! II Revelation is your "spell-check" to eternity. You may have been "saved" for years, but your "sanctification" may need a polish up! We are running out of time. II Revelation is the most wonderful, and easy, study tool - for your refresher course to "par excellence"...! Enjoy it. You will be glad you did. See you at the Marriage Supper! Be Blessed. Leila Nord."

Edward Nabozny, United States, Testimonial:
"ABSOLUTELY BEAUTIFUL."
"God's words. Absolutely beautiful. So wonderful that He also uses people of today to get across His message to us."

Piet Goemans, Canada, Testimonial:
"I read both books and they confirmed my thoughts and beliefs that our Lord God loves us so very much...."
UA-50506160-1